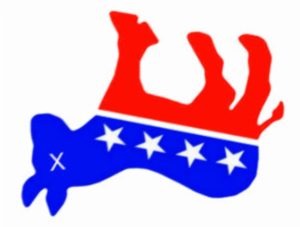 You don’t need to be a genius to see that the Democratic Party doesn’t really stand for anything when it comes to the issues that matter most to U.S. voters. This is a topic I’ve written about incessantly since last year’s embarrassing loss by status quo, corporate media, donor-favorite Hillary Clinton, and it was highlighted once again in a recent Washington Post-ABC News poll with the response to the following question.

Despite the dire implications of the above, the brain-surgeons leading the party remain committed to running on “Trump works for Putin, let’s start a war with Russia” while ignoring the multitude of very important issues people really care about — you know, like oligarchy and increasing economic insecurity.

To give you a sense of the degree of cluelessness, read the following excerpts from a CBS News article titled, Democrats Split Over Core Message to Voters as 2018 Midterms Loom:

“That message is being worked on,” the New York congressman said in an interview this past week. “We’re doing everything we can to simplify it, but at the same time provide the meat behind it as well. So that’s coming together now.”

The admission from the No. 4 House Democrat – that his party lacks a clear, core message even amid Republican disarray – highlights the Democrats’ dilemma eight months after President Donald Trump and the GOP dominated last fall’s elections, in part, because Democrats lacked a consistent message.

That’s not exactly true. Democrats have consistently been yelling about Russia, and it’s not doing them any favors.

The soul-searching comes as Democrats look to flip at least 24 GOP-held seats necessary for a House majority and cut into Republican advantages in U.S. statehouses in the 2018 midterm elections. Yet with a Russia scandal engulfing the White House, a historically unpopular health-care plan wrenching Capitol Hill and no major GOP legislative achievement, Democrats are still struggling to tell voters what their party stands for.

For now, at least, Democrats are waging a tug-of-war largely between the Russia investigation and the GOP’s attempts to gut the 2010 Affordable Care Act.

“Asymmetry of Indulgence”—Why Black Cops Can Kill When White Cops Can’t, and Why No-One Cares About Mexicans (Or Whites)