Stockholm Syndrome is defined as “…a condition that causes hostages to develop a psychological alliance with their captors as a survival strategy during captivity.” While observers would expect kidnapping victims to fear and loathe the gang who imprison and threaten them, the reality is that some don’t.

There is a loose analogy between being held hostage and being an investor in a regime of irredeemable paper currency and zero interest rates. In both cases, the victim has little hope of escape and must seek to somehow survive under malevolent conditions.

Key behaviors in Stockholm Syndrome are positive feelings for their captors, a refusal to work with law enforcement afterwards, and even a belief in the terrorist’s humanity.

Key behaviors of investors today show eerie parallels: a desire to bid on dollars with their assets, a refusal to support the gold standard, and even a belief that the dollar is money. This last always shows when someone—even a gold bug—says gold is going up, or gold is the best performing currency, or gold has good returns.

Many victims are so thoroughly in thrall, that they scoff at the very idea of earning interest from a productive enterprise. They seek only the latest bubble, wherein they can make a profit: more dollars. Or, if not more dollars, at least more purchasing power. For years, they sought to do this in the gold and especially silver markets. Some gold bugs go even farther, and opposed a gold standard. Perhaps they don’t want sound money, they want gold to go up which means something external that gold can go up against.

We watched bemused, as a speaker at the Metal Writers Conference in Vancouver on May 29 told a standing-room-only crowd that bitcoin would hit $1 million (it went up after that, but is now down about 15{5f621241b214ad2ec6cd4f506191303eb2f57539ef282de243c880c2b328a528} from that day). A 436X return would be nice, but of course the profits can only come from later speculators. There is an ugly little word for schemes in which profits come from those who buy in later. It is named for a gentleman who came from Italy, promoting his scheme in Boston.

We blame the game, not the player. It is important to emphasize this—don’t blame the players, blame the game—and we probably don’t do it enough. The fault lies not with those who bet on gold or bitcoin or anything else, nor even with those who regard betting as investing. The fault lies with the Fed and the other central banks who have the hubris to think they can centrally plan their way to prosperity. And the gun to force it on us, whether we agree or not. And the madness to cause the interest rate to fall for 36 years and counting (the Fed is not going to push the interest up much farther in this cycle, if they even dare one more hike). When freedom seems so remote as to be hopeless, it may be natural (we leave this to psychologists to say) to find a way to compromise, to get along to go along.

As to us, we will go on working towards that day of freedom, a big part of which is helping people see the monetary system for what it is: the current implementation of the fifth plank proposed by Karl Marx. Another part is to pay interest on gold… 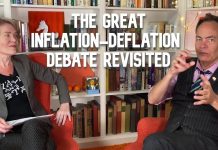