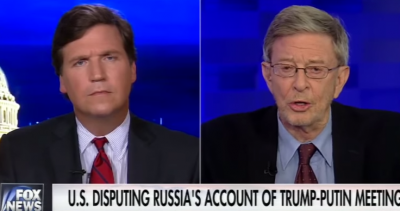 Last night he was the featured guest on the most watched news show in the country, being cheered on by the host, who has him on as a regular.

And Cohen isn’t remotely a conservative. He is a contributing editor at the arch-liberal Nation magazine, of which his wife is the editor. It doesn’t really get pinker than that.

Some choice quotes here, but the whole thing is worth a listen:

“The first thing you notice is just how much the press is rooting for this meeting between our president and the Russian President to fail.

It’s a kind of pornography. Just as there’s no love in pornography, there’s no American national interest in this bashing of Trump and Putin.

As a historian let me tell you the headline I would write instead:

“What we witnessed today in Hamburg was a potentially historic new detente. an anti-cold-war partnership begun by Trump and Putin but meanwhile attempts to sabotage it escalate.”

I’ve seen a lot of summits between American and Russian presidents, … and I think what we saw today was potentially the most fateful meeting … since the Cold War.

The reason is, is that the relationship with Russia is so dangerous and we have a president who might have been crippled or cowed by these Russiagate attacks … yet he was not.

He was politically courageous. It went well. They got important things done.

I think maybe today we witnessed president Trump emerging as an American statesman.”

Cohen goes on to say that the US should ally with Assad, Iran, and Russia to crush ISIS, with Carlson bobbing his head up and down in emphatic agreement.

Carlson tried to draw Cohen out about who exactly in Washington is so against Assad, and why, and Cohen deflected, demurring – ‘I don’t know – I’m not an expert’.

Of course he knows, as does Carlson – it is an unholy alliance of Israel, Saudi Arabia and their neocon friends in Washington and the media who are pushing this criminal policy, who support ISIS, deliberately. But they can’t say so, because, … well, because. Ask Rupert Murdoch.