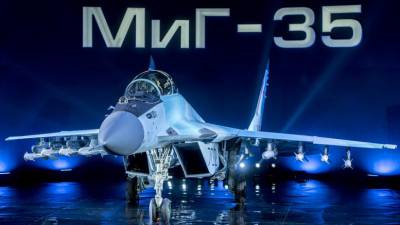 Good afternoon from Moscow. Today is June 26, 2017. And is the news full of heinous acts of Russian Meddling? You know it.

Today’s top story: Russia’s fourth-generation light fighter, the MiG-35, is expected to be one of the highlights at the MAKS international air show in July.

The MiG-35, designed to replace MiG-29s rounding out their fourth decade in service, was absent from [the Paris Air Show] but will be featured at the MAKS international air show near Moscow in July as engineers finalize testing on the aircraft, said Anastasia Kravchenko, public relations director for MiG. Still to be determined is whether the fighter will be featured in a static display or aerial demo, she said.

“If we’re talking about fifth-generation technologies, we can safely say that we have some of them integrated and not in tests, but in use by this jet,” said Kravchenko, speaking to Military.com through a translator.

Some of those technologies include stealth capabilities, extreme maneuverability, and increased power: 12 percent more than previous models, she said.

The MiG-35 could see service as early as 2019. Get yours while supplies last.