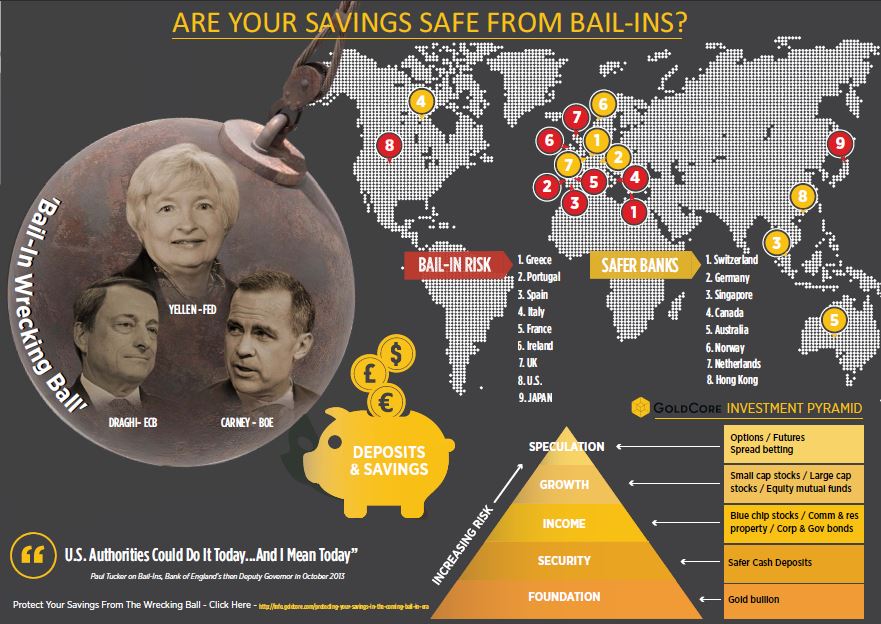 The risks posed to investors and savers from the coming economic crisis and the threat of bank bail-ins, negative interest rates, ‘helicopter money,’ capital controls and the “cashless society” has been looked at in an excellent and timely article by economist John Adams, writing in the Daily Telegraph.

While the article is focused on how these risks threaten Australia and Australian investors and savers, the risks outlined are ones which threaten even those with modest amounts of wealth and all exposed to the western financial system.

“Globally, household, corporate and sovereign debt are at unprecedented levels. They are also linked through a fully integrated global ­financial system and an array of complex financial derivatives.

Given the scale of the system, the probability of a global stock, bond and real estate crash, coupled with a wave of corporate, bank and sovereign ­defaults via rising interest rates, ­increases dramatically.”

“Worryingly, the monetisation of government and corporate debt, nominal or real negative interest rates, “helicopter money” (issuing freshly created money directly to citizens), bank bail-ins, capital controls and the eradication of cash through financial digitisation are all being contemplated by American and other international central bank officials.

Such measures seek to, in effect, trap citizens to keep their money in the financial system and to allocate their money into particular asset categories, thus preventing bank runs or hoarding which can occur when confidence in political, economic and ­financial systems collapse.”

“Thus it is up to individuals to think about what they can do to mitigate their own risks.