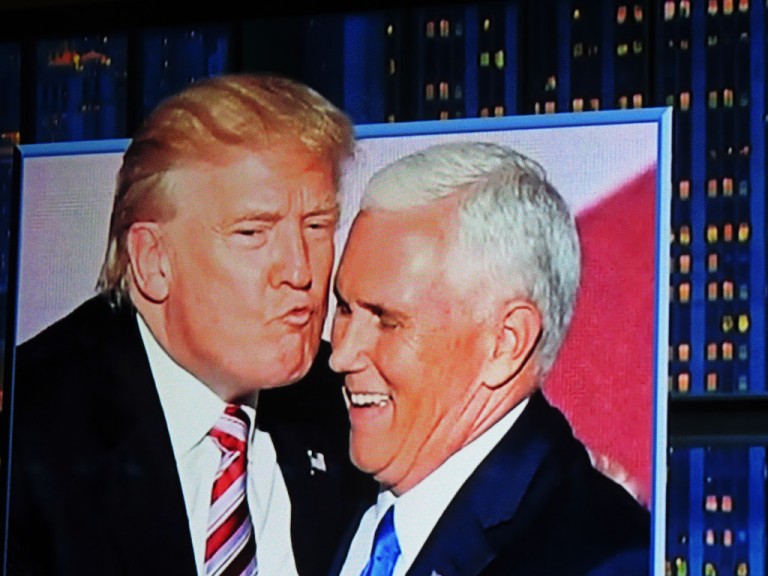 I have never approved of President Trump’s choice for Vice-President. For reasons that will reiterate, later in this article, Pence and the Trump agenda are horribly mismatched.

When Trump made his VP announcement, I did not waiver in my support of Trump, but I was very vocal in my opposition to Pence. I was roundly criticized by many Trump supporters for expressing my opposition to the Pence appointment. Now, it would appear that a big “I told you so” may be in order.

Pence is salivating at the notion that the Democrats,or some nefarious set of people, will remove Donald Trump from office through invoking the 25th Amendment’s disability clause. The Democrats allege that Trump is mentally ill and this will be their justification. Assassination remains a real possibility, simply look at the attempt on Ivanna’s life.

Is this why Pence has a Presidential PAC for 2020?

These stunning facts give rise to the fact that Trump’s biggest internal obstacle may prove to be Pence and his unbridled ambition to become the next President.

Pence Is Betting on Impeachment or Assassination

Vice-President Pence’s true colors are surfacing. I said it when he was selected for the VP spot. Pence is a globalist and a selfish opportunist. This fact is now being born out as he has started a PAC in order that he may run for President in 2020. The name of the PAC is the Great America Committee. Why would a Vice-President need his own PAC? This is not the Trump/Pence PAC, it is merely the Pence PAC and it unashamedly demonstrates Pence’s lack of support for Trump and his ideals as he is preparing to run for President in 2020.

This should not be surprising as Pence should have already publicly defended his boss in the media when the revelations about Trump’s locker room talk surfaced during the campaign. Pence did not stand by Trump. He could have said something like “what would the country rather have, a man who engages in common locker room talk, or a woman who is a traitor to her country”? Crickets were chirping in the Pence camp.

When Pence went to Trump over Flynn’s for lying to him, Trump did fire Flynn. Why didn’t Pence holding a press conference and stating as such. This would contradict the lies being told by Comey with regard to the obstruction of justice allegation and collusion with the Russians. Pence is Trump’s Achilles heel.

Trump’s disloyalty is on full display in a recent New York Times article.

From the New York Times

“….The centerpiece of the effort is a string of dinners held every few weeks at the vice president’s official residence on the grounds of the Naval Observatory in Washington. Mr. Pence and his wife, Karen, have presided over at least four such soirées, and more are in the works. Each has drawn roughly 30 to 40 guests, including a mix of wealthy donors such as the Chicago hedge fund manager Kenneth C. Griffin and the brokerage firm founder Charles Schwab, as well as Republican fund-raisers and executives from companies like Dow Chemical and the military contractor United Technologies.

The guests and their families collectively donated or helped raise millions of dollars to support the Trump-Pence ticket in 2016, and some are viewed in Republican finance circles as likely supporters for two new groups created to advocate for Mr. Trump, Mr. Pence, their legislative agenda and congressional allies. The dinner guest lists were curated in part by two of Mr. Pence’s closest advisers, who have also played important roles in starting the new political groups, America First Policies and America First Action. Mr. Pence has appeared at recent events outside his official residence with prospective donors to the groups.”

One might argue that Pence is raising money for Trump for the 2020 election. Then why is the money going into Pence’s PAC? Why does the VP need his own PAC? Pence is becoming a major liability to Trump. He is actively plotting to replace Trump in 2020 because, presumably, someone from the Deep State has indicated a change is coming.