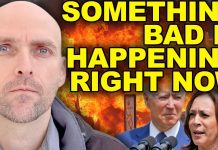 SOMETHING BAD IS HAPPENING AND IT’S ABOUT TO GET WORSE. YOUR FUTURE IS BEING RIPPED AWAY