So how can people afford it all? Through soaring incomes? Hardly. 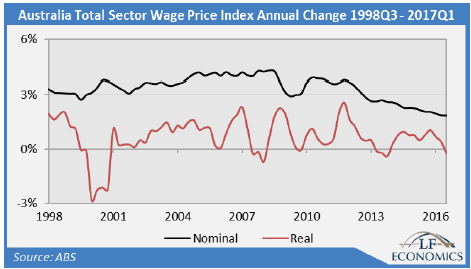 This real-wage problem arrives at a time of:

Surging housing construction, particularly of condos. CoreLogic’s Tim Lawless pointed out that these “higher supply levels in the unit market appear to be creating a drag on the performance of the unit sector in specific segments.” Hence the measly increase in condo prices in Melbourne.

Rising mortgage rates, just “when household debt levels have never been this high,” Lawless warned. “It suggests households are becoming much more sensitive to these rate rises.”

A crackdown by lenders on investors. Banks are now fretting over risks and record low rental yields in Sydney and Melbourne. Under pressure from regulators, they’ve raised rates for investors and are curtailing interest-only mortgages. “We are likely to see further tightening and repricing around investment lending and interest only lending over the coming months,” Lawless said.