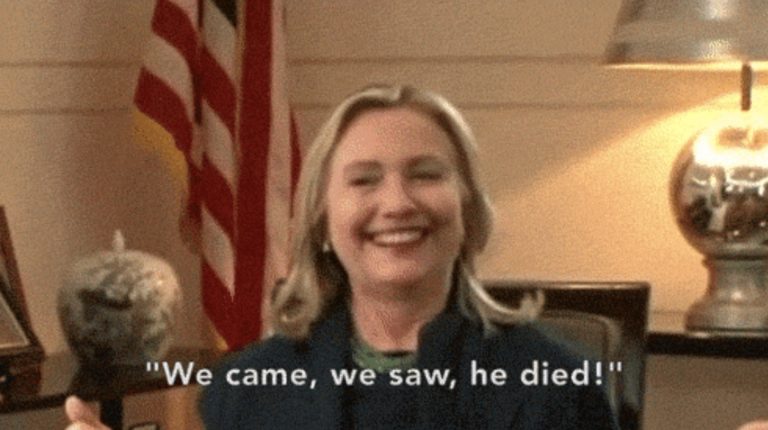 Late last week, I came across a fascinating article published at Mondoweiss highlighting a recent study positing that Hilary Clinton may have lost the election to Donald Trump partly as a result of her well documented lust for imperial war and aggression.

Here are a few excerpts from the piece:

An important new study has come out showing that Clinton paid for this arrogance: professors argue that Clinton lost the battleground states of Wisconsin, Pennsylvania, and Michigan in last year’s presidential election because they had some of the highest casualty rates during the Iraq and Afghanistan wars and voters there saw Clinton as the pro-war candidate.

By contrast, her pro-war positions did not hurt her in New York, New Jersey, Connecticut, and California, the study says; because those states were relatively unscathed by the Middle East wars.

And here are the authors themselves on the moral hazard at work here. The people who decide are not suffering as much.

America has been at war continuously for over 15 years, but few Americans seem to notice. This is because the vast majority of citizens have no direct connection to those soldiers fighting, dying, and returning wounded from combat. Increasingly, a divide is emerging between communities whose young people are dying to defend the country, and those communities whose young people are not.

No nation can remain a cohesive unit for long under the above circumstances. Not to mention the fact that it’s extraordinarily unethical.

Here is another powerful excerpt from the paper:

Imagine a country continuously at war for nearly two decades. Imagine that the wars were supported by both Democratic and Republican presidents. Continue to imagine that the country fighting these wars relied only on a small group of citizens—a group so small that those who served in theater constituted less than 1 percent of the nation’s population, while those who died or were wounded in battle comprised far less than 1/10th of 1 percent of the nation’s population.

And finally, imagine that these soldiers, their families, friends, and neighbors felt that their sacrifice and needs had long been ignored by politicians in Washington. Would voters in these hard hit communities get angry? And would they seize an opportunity to express that anger at both political parties? We think the answer is yes.

Their argument is obviously aimed at coastal elites, which have more power than rural communities over decision-making, but far less to lose. The authors are unsparing about the very different experience of war for different communities.

When the United States goes to war, the sacrifice that war exacts in blood is far from uniformly distributed across the country. And in the Civil War, Korea, Vietnam, and Iraq, constituencies that have suffered the highest casualty rates have proven most likely to punish the ruling party at the polls.

In the Iraq and Afghanistan wars, for example, seven states have suffered casualty rates of thirty or more deaths per million residents. By contrast, four states have suffered casualty rates of fifteen or fewer deaths per million. As a result, Americans living in these states have had different exposure to the war’s human costs through the experiences of their friends and neighbors and local media coverage.

The four states with the lowest rates are NY, NJ, CT and Utah. All but Utah voted Democratic. Overall, rural states have higher casualty rates, and the authors find pretty significant inverse correlations between state income and education medians and casualty rates. Though it must be noted that Vermont suffered the worst casualty rate– more than 41 deaths per million– and it is home to the most vociferous antiwar candidate, Bernie Sanders, but was also very safe for Clinton.

People in the tristate area where I grew up should think a bit more deeply about support for imperial wars abroad, especially when their families aren’t as willing to make the necessary sacrifices.

The president’s electoral fate in 2020 “may well rest on the administration’s approach to the human costs of war,” the paper suggests. “If Trump wants to maintain his connection to this part of his base, his foreign policy would do well to be highly sensitive to American combat casualties.” More broadly, the authors argue that “politicians from both parties would do well to more directly recognize and address the needs of those communities whose young women and men are making the ultimate sacrifice for the country.”

The most effective way of addressing their needs is to advance a foreign policy that does not see Washington as the world’s policeman, that treats U.S. military operations as a last resort, and that rethinks the foreign policy establishment’s expansive and often vague definition of national security interests.