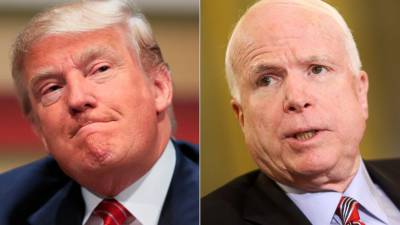 When I look back on the events of the last week I see one common theme, Donald Trump is pushing back against his biggest enemy, John McCain. From the moment Trump and Vladimir Putin announced the ceasefire zones at the G-20, the U.S. opposition went into full anti-Russian meltdown mode.

Donald Trump Jr’s Russian lawyer troubles were held back to be used to control the narrative post G-20. After that we have the slow drip of similarly thin evidence of the Trump campaign canoodling with the enemy last year to dig up dirt on Hillary Clinton.

Honestly, these ham-fisted attempts to entrap the Trump team for future blackmail purposes are idiotic. There was nothing a Russian spy was going to tell the Trump team that was worse than what Hillary was doing to herself at the time.

Now we have the anti-Russia rhetoric reaching the unbearable level as Fox News saddles their ratings champ Tucker Carlson with the odious like of Lt. Col. Ralph Peters and the Head of the CFR Goon Squad Max Boot screeching and preening about the moral bankruptcy of Russia, Russians in general and Putin in specific.

And it’s straight out of the John McCain playbook. Claim the moral high ground and attack by invoking Godwin’s Law anyone who dares to prick the Overton Bubble of acceptable thought on U.S./Russian relations.
Only McCain is too senile to articulate anything in a relatively open forum anymore. Anyway, if Peters and Boot, who presumably still have all their marbles, got thumped by Carlson, you know McCain would never last thirty seconds in the ring with The Tuck.

It’s offensive that these irrational ideologues are what passes for foreign policy experts in today’s U.S. And, what’s worse is that Trump is stuck having to hire from this miasma of bile-spewing morons to get any operational competence in his administration because that’s all we train in this country.

But, that said, once this latest round of Putin is Hitler nonsense reached its fever pitch, quietly, we see push back. First, the defamation lawsuits hitting the wire about McCain’s involvement in the infamous “Trump Dossier” compiled by a foreign government to gather dirt on a political opponent.

So, where Donald Trump Jr. took a meeting that everyone involved got bored with and left, John McCain apparently sent staff overseas to collude with a foreign intelligence service, MI-6, to undermine ‘the sanctity of our elections.’

Trump’s FBI Director Nominee Christopher Wray said he would be happy to look into issues surrounding the DNC and Ukrainian operatives trying to dig up dirt on Trump. This is likely going to lead back to McCain as so many other things associated with Ukraine over the past four years have.
If Wray is confirmed it should begin to truly open the door to a number of uncomfortable issues surrounding the 2016 election cycle and many of our recent foreign policy decisions.

Then we have the unbidden attack by the Israeli Foreign Ministry on George Soros while clarifying, again unnecessarily, the Israeli Ambassador to Hungary’s comments about responses to President Viktor Orban’s anti-Soros campaign.

For decades Soros has been trying to destabilize the Israeli government but they always turned the other cheek so as to not go against a fellow Jew. But, Soros is now decidedly Trump’s enemy and this is the way the Netanyahu government can begin to repay Trump renewing the U.S.’s loyalty.

It’s a subtle thing, but this is how things build until deals are made behind the scenes or people wind up doing perp walks. McCain is not much of a poker player. He’s a hot head who has dutifully done the bidding of his masters who know he pulled a Tokyo Rose while captured by the North Vietnamese and use him for their own purposes.