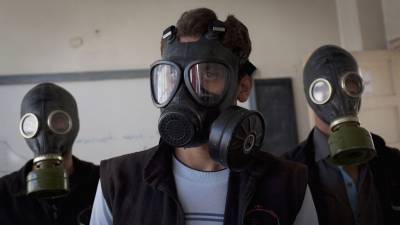 An Islamist rebel group has accused the Syrian army of using chlorine gas against its fighters on Saturday, according to Reuters.

Since the alleged chlorine holocaust involves Islamist rebels, and not small children, we imagine this is probably a dress rehearsal for something much larger.

A Syrian rebel group accused the Syrian army of using chlorine gas against its fighters on Saturday in battles east of Damascus – an accusation the military swiftly denied as a fabrication.

The Failaq al-Rahman group said more than 30 people suffered suffocation as a result of the attack in Ain Tarma in the Eastern Ghouta region, which government forces have been battling to take back from insurgents.

In a statement circulated by state-run media, a military source said the army command completely denied the accusation. “It has not used any chemical weapons in the past, and will not use them at any time”.

The Russian government warned earlier this week of a planned provocation involving a fake chemical attack in Syria.