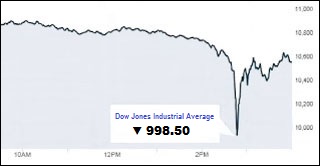 Over the past year, there have been flash crashes in multiple markets, raising concerns that fat fingers, algorithms and/or rogue hedge fund traders are still running amok. We’ll get to the specifics in a moment, but to put the unusual trading patterns in context, you need some important background information.

Wall Street On Parade began reporting on flash crash activity following the Granddaddy of all flash crashes thus far – the event on May 6, 2010 when the stock market did a bungee jump, briefly plunging 998 points, with hundreds of stocks momentarily losing 60 per cent or more of their value and knocking out stop-loss orders for retail investors. Former SEC Chair Mary Schapiro estimated at the time that individual investors had lost more than $200 million in these improperly triggered stop loss orders on May 6. (Read our skepticism on the official regulatory report here.)

What is a stop-loss order? Small investors frequently put in place standing stop-loss orders that rest on the stock exchange order books to sell a stock at a pre-determined exit price that is lower than the current market in order to “stop” further losses. Once the target price of the stop-loss order is reached, the order automatically becomes a market order and is executed at where the market happens to be. In properly functioning, orderly markets, this would typically mean the stop-loss order would be executed at, or close to, the designated target price. In flash crash markets, on the other hand, it can result in massive losses to the little guy. (Read more granular details on these types of orders here.)

A stock market where stocks can lose 60 percent of their value in minutes, lock in losses for the little guy, then stage a miraculous recovery, is not really the kind of place where most people want to put their serious money. Indeed, the May 6, 2010 flash crash, following the revelations of abject corruption on Wall Street that emerged from the 2008 crash, permanently destroyed the confidence in U.S. markets for millions of Americans.

Given the outcry over the May 6, 2010 flash crash, one would have thought that Federal regulators would have gotten a solid grip on the situation to prevent another major flash crash. But just a little more than two years later, Bloomberg News was reporting the following about insane market disruption from Knight Capital: