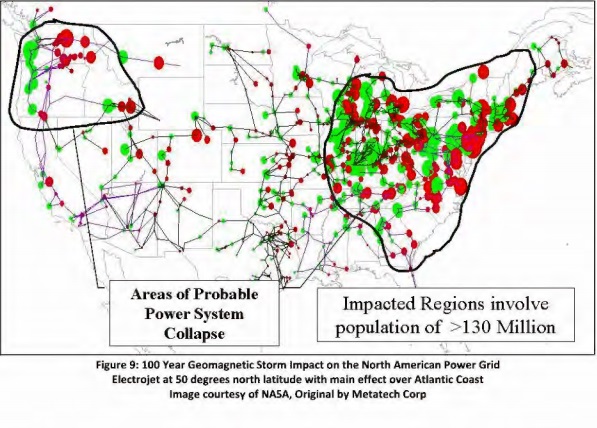 The report covers a variety of scenarios, while detailing vulnerabilities and assessing risks, and while we encourage everyone to read the entire report (embedded below) for comprehensive understanding, we will highlight some of the most concerning below.

Under the category of “assessing the risk” on page 25, they highlight the 1859 Carrington-Hodgson, stating “Anecdotal observational records of low-latitude red aurora hint that the largest events may occur roughly every 500-600 years, before dropping the bombshell “However, events strong enough to severely impact modern systems may occur as frequently as once in 100 years .

Indeed two storms, 1859 and 1921, were of sufficient strength that their repeat today could cause large-scale power grid collapse.

The previously unpublished report also details how close we have already come to seeing the collapse of the Northeast and northern Midwest power grids back in 1989:

Further, the March 13, 1989 storm that collapsed the Hydro Quebec power grid in Canada came within seconds of collapsing the Northeast and northern Midwest U.S. power grid (Kappenman, 2005). Kappenman (2005) reports that “the size and intensity of this Westward Electrojet structure, had it developed 5- 7 h later, would have extended from east coast to west coast of the entire northern-latitude portions of the US power grid, and is likely to have produced much more significant consequential impacts … . ” It should be noted that the power grid, due to deregulation since 1989, is actually more vulnerable today (National Academy of Sciences, 2008).

Being an older report, the dates where certain events were projected have already passed, but since space weather never ends, their chilling warning when they state “The threat is real,” makes it very clear that the vulnerabilities of the infrastructure involved, has gotten worse, not better.

On page 13, shown in the chart below, they list the trigger/Scenario event as “CME arrives at Earth causing geomagnetic storm,” showing the warning times listed as “15 minutes for geoeffectivity (17 hours from flare sighting). Affects: GEO satellites on daylight side exposed to solar plasma ; Some satellite communications and GPS signals severely disrupted due to scintillation in ionosphere; HF systems may work due to increased ionization at ionosphere F Layer ; Significant power grid collapses may occur in North America and elsewhere; could require 4-1 0 years to fully restore; “Last mile” telecommunications lost where no backup power available (e.g. cable, VoIP, data networks, etc.) 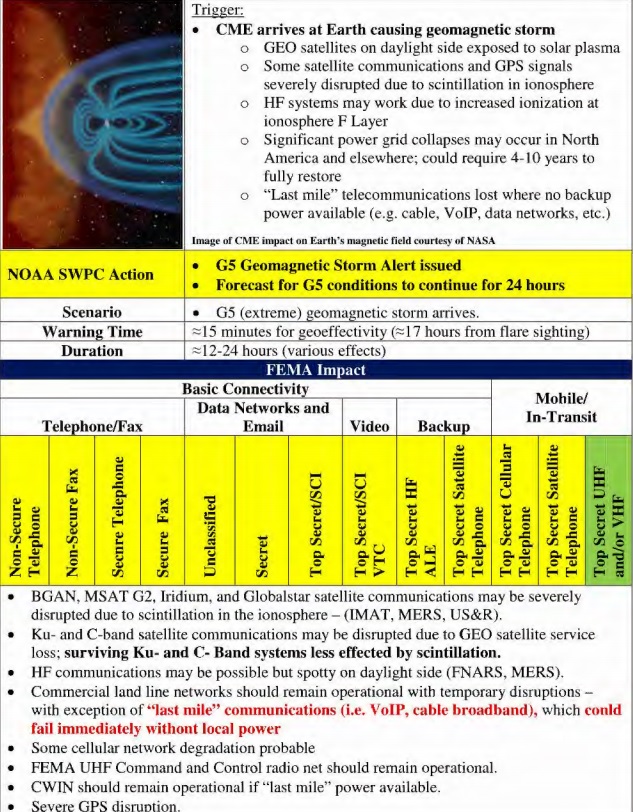 While many preppers understand clearly that in a grid down scenario, we are on our own, or part of a community that is prepared, but the government will not immediately be on hand to help, but those that have denied that any grid down scenario could potentially last for years, will be completely unprepared for the fact that according to this newly revealed report, FEMA itself, as well as “partners at all levels, specifically state and local emergency management organizations that rely on amateur HF for incident operations support, will be suffering disruptions.