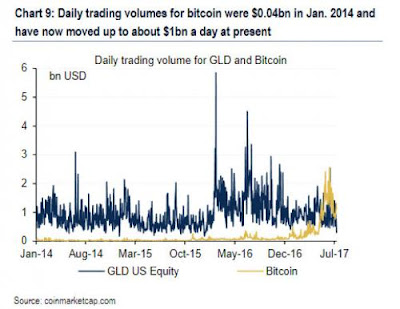 It is interesting to see some of the parallels made when it comes to Bitcoin and other cryptocurrencies. Is it comparable to the dollar and euro, which are part of a $5-7 trillion daily market known as FX? Is it comparable to physical gold and silver, thus designating it as a commodity versus a currency? Or is it a virtual security on par with equities and bonds?

Either way, analysts have begun to make multiple cases for it being tied to each sector of the market. And on July 25 and analyst at Bank of America published a new update in which he noticed that volumes for Bitcoin have now surpassed the volumes traded for the primary Wall Street vehicle for gold, which is the GLD ETF.

Several weeks after Goldman’s chief technician started covering bitcoin, overnight Bank of America has released what some may call an “initiating coverage” report on bitcoin which notes that while the cryptocurrency remains very volatile and risky, bitcoin has experienced a spectacular surge in liquidity in the last six months. However, BofA remains stumped when it comes to making any official forecasts BofA’s commodity strategist Francisco Blanch writes that bitcoin is uncorrelated to any financial asset, “so there is no way to explain let alone predict returns.”

While we will present some of the more notable findings from the report shortly, one observation caught our attention, namely that in at least one regard, bitcoin has already surpassed gold: the total daily trading bolume for bitcoin has now surpassed that of the biggest gold ETF, the GLD.

As BofA notes, “it is hard to ignore that trading volumes for major digital currencies like bitcoin and ethereum have skyrocketed in recent years. For example, daily trading volumes for bitcoin were $400mn in 2012 and have now moved up to about $2bn a day at present” which also means that – at current BTC prices – the total ADV of BTC traded is higher than that of GLD. – Zerohedge

While we have to note here that the above comparison is not a true relation between Bitcoin and physical gold, but rather between Bitcoin and an equity representing gold, it does suggest that the cryptocurrency is conducting battle against multiple securities which are dependent upon how investors themselves see Bitcoin as, and thus how they choose to trade it as.