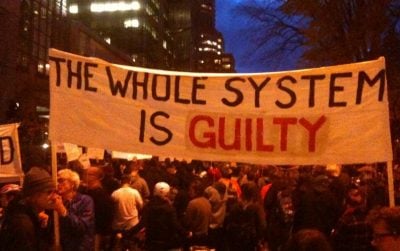 Have the people of the United States been the victims of regime change operations at home? Have the wealthiest and the security state created a government that serves them, rather than the people? To answer these questions, we begin by examining how regime change works and then look at whether those ingredients are being used domestically.

Almost from the start, the CIA’s role has been more than intelligence gathering. It has been a key player in putting in place governments friendly to the United States and conducting other operations, e.g. the CIA is currently involved in drone strikes.

One of the first regime change operations of the CIA was Operation Ajax conducted in Iran, and led by Kermit Roosevelt, the grandson of Teddy Roosevelt, who was president when the US solidified its global empire ambitions. The CIA was founded in 1947 and the regime change coup in Iran was 1953. Greg Maybury writes in “Another Splendid Little Coup“: “Placing to one side an early dress rehearsal in Syria in 1949, the Iran coup was the first post-War exercise in regime change upon the part of Anglo-American alliance…” Just this month the US government released documents showing the CIA and State Department’s planning and implementation of the coup against the democratically-elected prime minister of Iran, Mohammed Mossadegh. This release supplements one from 2013 that did not reveal the full role of the US in the coup.

The Iran coup was crude compared to more modern efforts but had the ingredients that have become common – civil society protests against the government, media reports supporting the protests, agents within the government supporting the coup and replacement of the government with a US-friendly regime. The Iran coup may have been the most costly mistake in US foreign policy because it undermined a secular democratic government in Iran that could have been the example for the region. Instead the US installed the brutal Shah of Iran, whose rule ended in the 1979 revolution, in which, as Maybury reports, the US was also implicated because it felt the Shah had overstayed his welcome.

The Iran coup was perceived as a great CIA success, so it was copied in other Middle Eastern countries as well as countries in Latin America, Africa, and the Caribbean. Regime change is still a major tool of US foreign policy. There is a long-term ongoing coup campaign in Venezuela, with its most recent episode last week in which a helicopter attack on the Supreme Court was tied to the US DEA and CIA. The US has allied with oligarchs, supported violent protests and provided funds for the opposition, which has also worked to undermine the Venezuelan economy — a tactic the US has used in other coups, e.g. the coup of Allende in Chile.

The coup in Ukraine, which the media falsely calls a ‘democratic revolution,’ was, as the head of the ‘private CIA’ firm Stratfor says, “the most blatant coup in history.” The CIA and State Department played the lead roles.

Victoria Nuland, an assistant secretary of state under Clinton, bragged that the US spent $5 billion to build civil society opposition against a government that leaned toward Russia. The government funded civil society opposition through US AID, which is the open vehicle for what the CIA used to do covertly, along with the National Endowment for Democracy. This funding was used to build oppositional civil society groups and create destabilization. They focused on the issue of corruption, which exists in every government, and built it up to a centerpiece for regime change. The US allied with extremist right-wing groups in Ukraine.

The US picked the new leaders of Ukraine. This included Petro Poroshenko, whom U.S. officials refer to as “Our Ukraine (OU) insider Petro Poroshenko” in a classified diplomatic cable from 2006 . The selected Prime Minister was Arseniy Yatsenyuk. Before the coup, Victoria Nuland told the US Ambassador to Ukraine that ‘Yats’ should be the prime minister. And, the Finance Minister was Natalia Jaresko, a long-time State Department official who moved to Ukraine after the US-inspired coup, the Orange Revolution, to become a conduit for US funding of civil society through her hedge fund. She was a US citizen whom Poroshenko made a Ukrainian on the day she was appointed Finance Minister. To top it off, fmr. Vice President Joe Biden’s son, Hunter Biden, and fmr. Secretary of State John Kerry’s longtime financial ally, Devon Archer, were put on the board of the largest private gas corporation in the Ukraine. Yet, the US media refuses to call this complete take over of the country by the United States a coup and instead describes Russia as the aggressor.

Subclinical Myocarditis: The Silent Killer – “There Is No Heart Damage That’s Mild or Inconsequential”