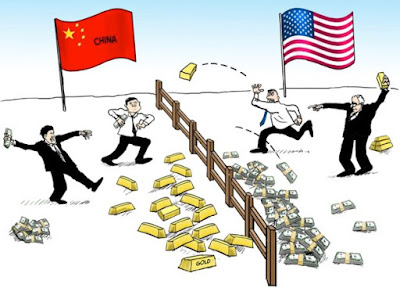 On July 10 the London Metals Exchange, a Hong Kong based corporation, threw down the gauntlet and is entering into the futures contract arena for both gold and silver.

In a return to the futures market for the first time in three decades, the LME is preparing to take on the LBMA and its Gold and Silver price Fixing mechanisms, as well as the Comex out of New York, in waging a war over control over the pricing of precious metals.

The world’s biggest industrial metals exchange is taking on the most powerful players in the gold market with the launch on Monday of its first futures contract for the commodity since the middle of the 1980s.

The London Metal Exchange and its partners aim to grab a piece of the action in a city where almost half the world’s gold changes hands. At stake are rival visions of how best to run the market, pitching the LME, Goldman Sachs Group Inc. and Morgan Stanley on one side and the London Bullion Market Association representing some of the biggest trading firms on the other.

Three years in the making, the gold contract, launched alongside another for silver, aims to draw investors from the off-exchange deals that currently dominate the city’s $5 trillion-a-year market.

“The gestation period has been longer than that of an elephant, but the baby is finally here,” Jeffrey Rhodes, founder of Rhodes Precious Metals Consultancy DMCC with more than 30 years in the industry, said from Dubai. “They’ve been coveting this for years and having waited so long, I think they’ll make it work.”

The LME’s parent, Hong Kong Exchanges & Clearing Ltd., also launched a gold contract in the Chinese city on Monday. While the contracts in Hong Kong and London aren’t fungible, the simultaneous start is expected to bring trading demand from across time zones to exchange-traded liquidity pools, said Lorraine Chan, a HKEX spokeswoman. – Bloomberg