by Liz Crokin, via The Common Sense Show:

Did you know that in Trump’s first 30 days in office, his people, mainly Attorney General Jeff Sessions, prosecuted 1,500 sex traffickers? To date, Trump/Sessions have prosecuted 3,500 child-sex-traffickers.

“This should be one of the biggest stories in the national news. Instead, the mainstream media has barely, if at all, covered any of these mass pedophile arrests. This begs the question – why?” Liz Crokin wrote for Townhall.com on February 25th.

The numbers are “staggering” when compared to the less than 400 sex trafficking-related arrests made in 2014 according to the FBI. 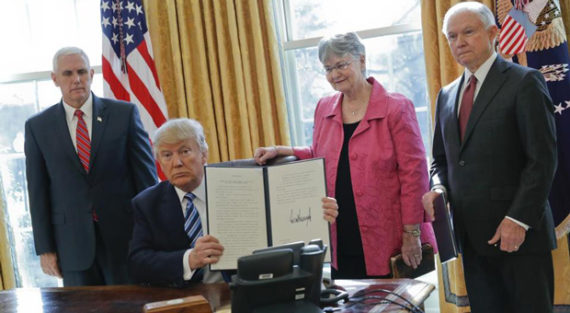 My guest from this previous Sunday night was fired by Townhall, shortly after running this piece on Trump and his intent on going after pedophiles. Liz told me in a private conversation that she was told by Townhall officials that they would never cover the subject again even if the President made it a news item. This opens up a whole can of worms about this publication. What is Townhall hiding? Liz Crokin felt compelled to flee the country for her safety.

I covered this same topic on the same date as Liz Crokin. The day before, President Trump announced that he was initiating a bold new initiative to go after child-sex-traffickers. I ran a video of the announcement on my Feb. 25th article. However, the video, a major announcement by the President of the United States has been scrubbed from the Internet. Any questions?

I tried to meet Liz Crokin for a long time and could not figure out why I could not reach her. The people that we know in common spoke of her professionalism and cooperative spirit. Then one day, my phone rings and it’s Liz Crokin. She had been in hiding as she revealed in the phone call. Why? Because her life was in danger for covering child-sex-trafficking and the involvement of the elite. In other words, she was treading on very thin ground, the kind thin ice that got Nancy

I have had a paradigm shift in my thinking regarding the establishment’s incessant and ridiculous Russian-collusion allegations against Trump. There is indeed collusion between Trump and Putin. On a previous interview with Liz Crokin, she stated that she was aware of a clear intent for Trump and Putin to work together to exterminate pedophilia from their respective countries. The previous evidence presented in this article speaks to this clear intent with regard to the direction both leaders are taking. There is the collusion, it is just that the mainstream media will never tell you the truth of what is really behind this collusion. The obvious goal of Deep State establishment is to keep the two world leaders apart on this issue because it exposes the raw evil that permeates our Deep State. Putin knows it, Trump knows, Liz Crokin knows it and now you know it.

The clear intent of the Deep State is not to just get Donald Trump impeached over the Russian collusion allegation, but to keep the 2 men apart.

In the following interview, Liz stated that her research is telling her that prosecution of the elite is about ready to reach a frenzied pitch and many of them are headed to prison for their crimes against humanity.

This interview should be downloaded and shared among the masses. Here is the interview about the most heinous crime on the face of the planet.