Things are worsening because we pursue the wrong policies

Recently I spent a month in Buenos Aires. I went there to study the culture and the economy of a formrely prosperous land, filled with kind well-educated people.

One key lesson was this: Given enough time, bad policies will eventually ruin any advantage.

While not as bad off as it was in 2002, when the masses took to the streets banging pots and pans in protest of their nations ruined economy, the city of Buenos Aires is still clearly depressed. As are most of its people.

More than that, all hope has been lost. Every time a new politician is elected, things are promised to get better, but they don’t. Argentina’s current woes are the result of far too many successive political regimes that made terrible decisions. It’s a clear as simple as this: Bad policies lead to bad outcomes.

As we learned in our interview with Daron Acemoglu on Why Nations Fail, what matters most for widespread prosperity is that the political and economic institutions be fair and inclusive. From the podcast:

It all depends on incentives and opportunities. If people have opportunities to become rich, to open businesses, be innovative, do things that are going to further their interests and at the same time the nation’s GDP (Gross Domestic Product) and they have incentives to do so, that’s going to lay the foundations of economic prosperity.

It’s the institutions, the rules, formal and informal regulations, and organization of society that determines what sort of opportunities are available to different people, to people from different walks of life, and what sorts of incentives they function under.

In Argentina, after having been economically disappointed so many times, any sense of economic vitality and entrepreneurial spirit has long since disappeared.

Old buildings there display a grandness in the quality of their architecture. Newer construction is clearly blocky, rushed, and low-grade.

“Basuras” are everywhere. They’re the street-side dumpsters located all throughout the city. Sometimes I would notice people rummaging in them as I walked about during the day. But after dark, formerly middle-class people can be seen in the basuras, usually from the knees down with their feet waving in the air, as they rummaged through looking for anything of value to glean: 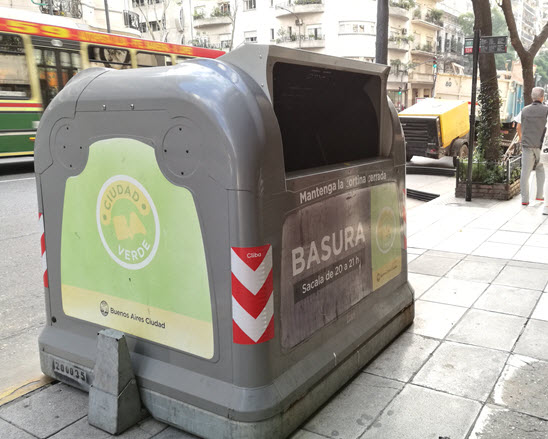 How did Argentina get here? How did a nation — once the most prosperous in the world on a per capita basis — stumble to a place of forlorn hope and such diminished prosperity that economists sometimes joke that there are first world economies, developing economies, and Argentina?

The answer is: Poor policies.

A long succession of flawed governance, coupled to some crucial mistakes in apportioning the spoils of the land to too-few wealthy families at the outset, has seved to erode the prospects for nearly all Argentinians.

Now rapid inflation is again back in the news. Having seen this movie before (and not that long ago, either) everyone dreads what’s coming next.

Argentina is instructive for us living in the rest of the world, because it is a real-time case study in how bad polices lead to bad outcomes. And in applying this same logic to central banks, we can conclude: Bad models lead to terrible outcomes.

So we should all very much care when our institutions, both political and economic, are becoming less inclusive and more extractive (and/or oppressive). Because if we continue down that road far enough, eventually the majority of us will find ourselves similarly waiting for night to fall as we slink off to tip headfirst into a basura.

On Delusions & Rackets
The longer this massive delusion of the viability of perpetual economic growth goes on, the more entrenched I find myself in a foxhole half-filled with dread. And I really don’t like it.

I’m ready for meaningful change. I want to be able to once again focus on the positive. I want to find ideas and people in leadership positions in whom I can believe. I’m sure you do as well.

I find myself thinking: Let’s just rip the Band-Aid off already! Let’s count the losses up now, apportion them fairly, and move on having learned some painful but useful lessons about living within one’s means as a society.

But that’s just fanciful dreaming. The powers that be are doing (and will continue to do) everything in their considerable power to prevent this from happening.

And so the list of things in which I have lost faith in in the US is large and growing:

The rule of law. Laid bare as a complete joke by Eric Holder under Obama, and now under Sessions/Trump.

Financial “markets.” These are now the playthings of machines that apparently cannot produce a single losing day for their owners as if they were legitimately money-making machines. But pay no attention to the fact that central banks are pouring $200 billion a month into these same “markets.” Further, try to ignore that it is the taxpayers on the hook for the “assets” the central banks are accumulating to legitimize the farce and remember to bust out your best ‘surprised face’ when the Wall Street machine operators get to keep their ‘winnings’ while taxpayers have to foot the eventual bill.

Politicians. Always a suspect crowd, their complete fawning subservience to banks, bankers and corporate money in general has led to an even more profound, almost final collapse in public confidence in them.

Sick care. Misnamed ‘healthcare’ this racket is so obviously a cesspool of corrupt, price gouging activities foisted upon desperate captive hostages in the throes of a medical emergency that it beggars belief that not one proposal out of DC has yet included the simple application of existing price-gouging laws that already protect you from hikes in the price of plywood during an approaching hurricane.

Foreign policy. Sure this is a complex sea of ever-changing interests and alliances but I am going to throw up if I hear one more State Department person talk about “democracy” in whatever country we’re bombing or secretly funneling arms into while saying nothing at all of Saudi Arabia’s grotesque violations of every principle that the State Department swears we hold dear. Bombing and creating chaos everywhere is a really bad policy, yet it’s somehow gotten entrenched and I am beyond tired of it.

Environmental/ecological policy. Anybody who thinks the US already went through and achieved something with the environmental movement in the 1970’s either hasn’t read the papers carefully lately, been outside in enough places, or both. 500,000 chemicals, many of them far more toxic than ones previously banned, have been released and done their damage. Insects are now gone from thousands of square miles subjected to neotnicotinoid pesticides. Obama’s administration punted as long as possible and then when the bad data was inescapable opted for “more study.” Trump will be worse. There’s another Silent Spring upon us. Shame is too light a word.