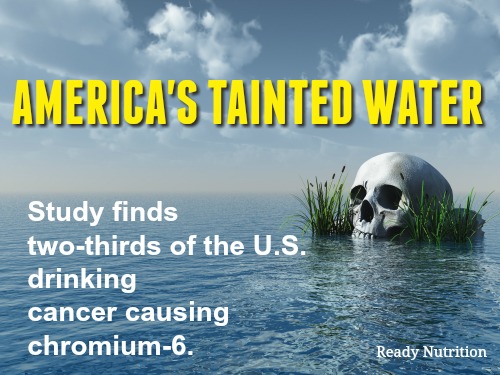 The water crisis in Flint, Michigan isn’t the only water supply found sickening its citizens. Recently, more news articles are suggesting that multiple municipal water supplies are being investigated for health compromising chemicals and heavy metals.

TCP, a chemical that causes cancer, has been found in California water supplies and, after further investigation and test data compiled by an activist group show this chemical has been detected by utilities across the country. As well, on the other side of the country, towns in New York and New Jersey are both dealing with chromium-6 being found in their water. Some of you may remember that chromium-6 was the cancer causing metal featured in the movie “Erin Brockovich”. That said, New York and New Jersey are not the only states to have this issue. In fact, the highest levels ever recorded were in Norman (Oklahoma), Honolulu (Hawaii) and Riverside (California).” Source

In a 2016 study, the Environmental Working Group (EWG) released an analysis of more than 60,000 tap water tests conducted nationwide, finding that chromium-6, or hexavalent chromium, is in the tap water of more than 218 million Americans. The study concluded that two-thirds of the U.S. are being served water with chromium-6 at, or above, the level that California state scientists consider safe.” Source

Despite the mounting evidence of chromium presence in drinking water and its harmful effects on human health, the problem has not been fully recognized by the state and federal regulatory bodies.

Moreover, if you think that solely drinking bottled water will protect you against chromium-6, think again. Rebecca Sutton, a senior scientist with the EWG and the lead author of a study conducted on carcinogens and harmful pollutants in water supplies stated, “Bottled water is not necessarily any safer than tap water,” said Sutton. “We just don’t have any guarantee that hexavalent chromium isn’t in that water.”

So how can you protect yourself? Sutton says your best bet is buying an effective water filter.

Until federal regulations are mandated for better drinking water, it is up to you to ensure your family is getting the purest form of water there is. This is one of the many reasons I am such an advocate for Berkey water filtration systems. This water filter is not only ideal to have in times of off grid emergencies, but can be used in everyday life as it removes this dangerous compound and other contaminants found in your water. According to the Berkey website the Black Berkey filter “will remove chromium-6 from tap water at levels greater than 99.9{5f621241b214ad2ec6cd4f506191303eb2f57539ef282de243c880c2b328a528}.”

Don’t take my word for it? Let’s look at some Berkey Water Filter stats:

Black Berkey water filter removes chromium-6 from your water, as well as 203 other harmful contaminants including fluoride, heavy metals, pesticides, pharmaceutical drugs, and dangerous microorganisms.
Has a top of the line gravity fed filter that exceeds EPA NSF/ANSI standards for filtration.
The filter removes 95{5f621241b214ad2ec6cd4f506191303eb2f57539ef282de243c880c2b328a528} of fluoride and arsenic!
Removes bacteria and parasites
Removes heavy metals like lead and mercury, VOCs (endocrine disruptors) and toxic chemicals like benzene and chlorine to levels higher than 99.99{5f621241b214ad2ec6cd4f506191303eb2f57539ef282de243c880c2b328a528}

Check out the lab results here

What I love the most is the simplicity and adaptability of using it in my everyday life, as well as in times of emergencies. A complete standalone system that can be setup in less than 10 minutes without any tools. You can have peace of mind with the Berkey water filter knowing that it is providing your family with safe drinking water. As well, it’s the most economical water purification system available as you can purify water for about two cents per gallon and it will last for years.

Hopefully, this article will prove that tainted water is widespread and it is up to you to ensure your family has quality drinking water.