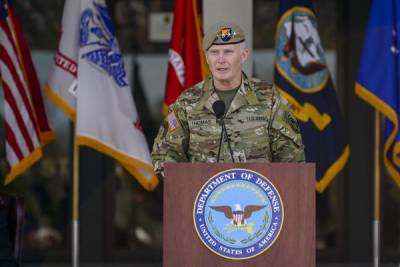 Speaking to the press the commander of all US Special Forces, General Raymond Thomas, acknowledged the US presence in Syria doesn’t have a leg to stand on in terms of international law:

Thomas acknowledged that American forces are fighting in a sovereign Syria, where they will likely “have no ability to stay” if that presence is questioned “in terms of international law,” Thomas said, replying to the Washington Post journalist’s question.

“Here’s the conundrum,” Thomas continued. “We are operating in the sovereign country of Syria. The Russians, their stalwarts, their back-stoppers, have already uninvited the Turks from Syria. We’re a bad day away from the Russians saying, ‘Why are you still in Syria, US?’

“It has come up in the form of some close calls there, but it will be hard – I defer to the lawyers in the crowd and others in terms of international law on the basis for us staying there other than our CT [counterterrorism] writ. We went there for all the righteous reasons, but if the Russians play that card, we may want to stay and have no ability to do it.”

It’s cute to see at least someone on the American side pretend they care an iota about international law, but why invoke the Russians? US isn’t trampling on the sovereignty of Russia, but of Syria.

Syria is the aggrieved party which under the law has the right to tell the US to pack up its coffers, and indeed continues to protests against illegal US presence—something which Thomas fails to even acknowledge.